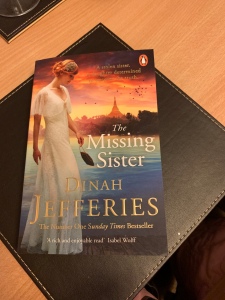 Belle Hatton has embarked upon an exciting new life far from home: a glamorous job as a nightclub singer in 1930s Burma, with a host of sophisticated new friends and admirers. But Belle is haunted by a mystery from the past – a 25 year old newspaper clipping found in her parents’ belongings after their death, saying that the Hattons were leaving Rangoon after the disappearance of their baby daughter, Elvira.

Belle is desperate to find out what happened to the sister she never knew she had – but when she starts asking questions, she is confronted with unsettling rumours, malicious gossip, and outright threats. Oliver, an attractive, easy-going American journalist, promises to help her, but an anonymous note tells her not to trust those closest to her. . .

Belle survives riots, intruders, and bomb attacks – but nothing will stop her in her mission to uncover the truth. Can she trust her growing feelings for Oliver? Is her sister really dead? And could there be a chance Belle might find her?

Belle has just arrived in Rangoon on the boat from England. Whilst aboard she strikes up a friendship with the lovely Gloria. Gloria is very knowledgeable and seems to know everybody. But is she really everything she seems … ?

Belle’s father has recently died so she needs to support herself, she’d had a job in a friends book shop in England but nothing that she could make a career out of. What she really wanted to do was sing. After months of trying she’s finally managed to secure a job as a singer in a hotel nightclub in Rangoon. So here she is, about to start her new life.

However she also has another reason to be in Rangoon …

Whilst sorting through her fathers belongings in his house after he died, she finds two newspaper cuttings. After reading them she realises that she had an older sister that she never knew about. It would appear that her sister, Elvira had been kidnapped as a newborn baby, never to be seen again. Her parents had been living in Rangoon at the time as her father had been a District Magistrate there.

So she embarks on a dangerous path to the truth. Along the way she meets people that are willing to help in her quest, but also she encounters problems and also things that endanger her life.

Will she ever find out the truth of what happened to the sister she never knew she had …?

I have read all of Dinah’s books and I always thoroughly enjoy them. She has this wonderful knack of writing about love, loss and family all woven together to make a brilliant tale. As soon as you start reading you are immediately spirited away and to a faraway land with such fabulous descriptions you can almost feel the sun on your face and the sand under your feet.

Excellently formed characters that you can really identify and really empathise with. The story is told from Belle’s perspective in 1936 and also from her mother Diane’s in 1920’s.

There is plenty to keep you interested with lots of things happening, the story moves along pretty fast. I thought this one felt was slightly different, but in a good way, from Dinah’s other books.

Another excellent read from the queen of the historical novels !

As always a huge thank you to Georgia Taylor for the review copy of the book in return for a honest review.