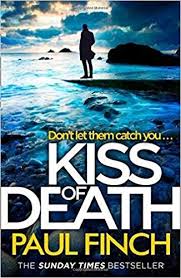 Back of the Book :

Don’t let them catch you…

A Deadly Hunt
DS ‘Heck’ Heckenburg has been tasked with retrieving one of the UK’s most wanted men. But the trail runs cold when Heck discovers a video tape showing the fugitive in a fight for his life. A fight he has no chance of winning.

A Dangerous Game
Heck realises that there’s another player in this game of cat and mouse, and this time, they’ve not just caught the prize: they’ve made sure no one else ever does.

A Man Who Plays With Fire
How far will Heck and his team go to protect some of the UK’s most brutal killers? And what price is he willing to pay?

This is the first in the series of currently seven books that have been written about ‘Heck”, Detective Mark Heckenburg, that I’ve read.

I don’t know if they’re all stand alone books or they all interlink. But I quite liked this book, it had plenty of twists and turns and some pretty good characters. It kept me on the edge of my seat, and it was pretty fast moving.

There is a bit of uncertainty in the main characters life, he seems to be a a bit of a crossroads in his life. Should he move to a different squad to be a DI or stay where he is ? Things are pretty bad in his present squad what with budget cuts and he has a bit of a past with his boss, DSU Gemma Piper. With all this going on he still has a job to do …

I have read quite a few thrillers with a police officer as the main character and I did think that Paul Finch had written “Heck” pretty well. He seems to be pretty good at his job as well as being human too !

And the ending ! well, what can I say ? Go and buy this book if its only for the ending alone !

A huge Thank you to Sabah Khan at Avon for the review copy of the book.

Here for your reading pleasure is a extract from the book …

The man came down the step from the door and approached, axe held loosely at his side. The vicar stood his ground and spoke boldly.

‘What are you doing here? Why are you damaging church property?’

‘You know what we’re doing here, shaman!’ a voice said from his right.

He glanced sideways: three more figures had risen into view, each from behind a different headstone. They too largely wore green; he saw old ragged jumpers, ex-military combat jackets. They too were masked: a toad, a boar, a rabbit, each one decked with additional monstrous features, and each with the same hate-filled eyes glaring out.

The vicar kept his voice steady. ‘I asked what you are doing here?’

‘You know the answer, you holier-than-thou prick!’ said a voice from behind.

When the vicar spun backwards, a fifth figure had emerged around the corner of the church. This one also wore green, but with brown leather over the top. His wooden mask depicted a wolf, and as he advanced, he drew a heavy blade from a scabbard at his belt; a hunting knife honed to lethal sharpness.

‘This is sanctified ground,’ the vicar advised them. ‘Use more blasphemies here, and I’ll be forced to chastise you.’

‘Really?’ Wolf was so surprised by that, that he almost came to a halt. ‘I can’t wait to see how you do it.’

‘Funnily enough,’ Wolf sneered, ‘the ones before you didn’t go willingly to it, either.’

‘You’re on your final warning.’

‘Perhaps your god will strike us down?’ Wolf was only five or so yards away. ‘Maybe throw a thunderbolt this fine summer evening.’

A rasping chuckle sounded behind the lupine mask. ‘You’ve got balls, I’ll give you that.’