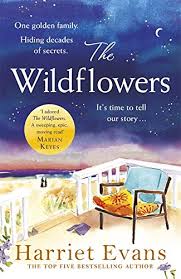 Tony and Althea Wilde. Glamorous, argumentative … adulterous to the core.

They were my parents, actors known by everyone. They gave our lives love and colour in a house by the sea – the house that sheltered my orphaned father when he was a boy.

But the summer Mads arrived changed everything. She too had been abandoned and my father understood why. We Wildflowers took her in.

My father was my hero, he gave us a golden childhood, but the past was always going to catch up with him … it comes for us all, sooner or later.

This is my story. I am Cordelia Wilde. A singer without a voice. A daughter without a father. Let me take you inside.

The Wilde’s (The Wildflowers as everyone called them) are a super-glam family that came down to ‘The Bosky’, a beach house overlooking the Dorset coast. Every summer they had many parties there and invited lots of up-and-coming actors and singers.

Madeline (Mads for short) found them fascinating, she spies on them a lot and knows everything about them, she also knows all their secrets. Mads writes everything she finds out about the Wilde’s in a exercise book that she found hidden in the porch of The Bosky  after they left for the summer one year. The exercise book had been hidden in a bird book.

Mads hasn’t had the best of lives, her mother died giving birth to her baby brother, most of the time she’s at school and in the holidays her Aunt Julia comes back from Australia to look after her. In the summer so goes home to Dorset with her dad. They have a house just up the path from the Wilde’s. Her father is quite abusive, he hits her and locks her in places and leaves her on her own a lot. All she wants is to be loved and looked after. Then one day, Tony Wilde literally knocks into her, he takes her home with him and its then that she finally gets to know the Wildflowers. But even then, even when she knows  the Wildflowers and they love her, she cant stop writing in that old exercise book ….

There are several timelines in this book, ‘NOW’, ‘Summer 1975 onwards’ and Wartime- Tony’s childhood.

This really is a sweeping, glittery family saga. Its full of love, lies and heartache with a few secrets thrown in for good measure. Marvellously written characters that jump out of the page at you and stay with you for days to come. I could really imagine being a guest at one of their fab parties standing on the porch of the house with a very alcoholic drink and your hand.

I quite liked the charismatic, adulterous Tony (an actor, darling !) and the gorgeous red-headed Althea and their two very spoilt children Cordeila and Bendict.

Such a beautiful story,  its really well worth reading, it had sat on my TBR pile for months and now I wish I had read it straight away.

I have always loved Harriet’s books and  wait in anticipation for the next one to be published, I think this is probably her best yet.

A huge Thank you to Helena at Headline for the very early review copy of the book.

She knew she would not sleep, not now she had looked back, down into the darkness again. Yet through that airless night as she lay with the duvet thrown off the bed, hot and restless, arms spread wide, eyes fixed unseeingly at the ceiling, Cord could only remember the good times.

They had been the Wildflowers, and they had been so blissfully, gloriously happy – Hadn’t they ? Before she – and it was her, the fault was all hers – had deliberately dismantled it all.

Bit by Bit. A family’s happiness. Her Family …. 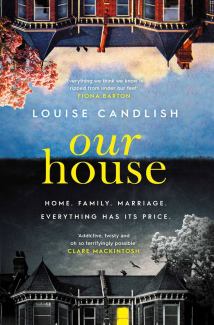 There’s nothing unusual about a new family moving in at 91 Trinity Avenue. Except it’s her house. And she didn’t sell it.

When Fiona Lawson comes home to find strangers moving into her house, she’s sure there’s been a mistake. She and her estranged husband, Bram, have a modern coparenting arrangement: bird’s nest custody, where each parent spends a few nights a week with their two sons at the prized family home to maintain stability for their children. But the system built to protect their family ends up putting them in terrible jeopardy. In a domino effect of crimes and misdemeanors, the nest comes tumbling down.

Now Bram has disappeared and so have Fiona’s children. As events spiral well beyond her control, Fiona will discover just how many lies her husband was weaving and how little they truly knew each other. But Bram’s not the only one with things to hide, and some secrets are best kept to oneself, safe as houses.

The story is told from three different perspectives : ‘ The Story’, ‘Fi’s Story’ told in the form of a vlog and ‘Bram’s -Word Doc’, which to all intense and purposes is a suicide note. So you find out what happened in ‘real time’ (The Story) and Bram and Fi’s accounts.

There are many twists and turns, just when you are just getting over one thing happening, something else, just as bad happens and you think WOW ! Just WOW ! Can it get any worse ? But then its does. I must admit I did gasp out loud quite a few times.

Bram’s character makes really bad choices. I don’t think that he’s really a bad person, but he’s just a very selfish one and he’s so misguided, very easily led. I really didn’t like him that much. But I felt really sorry for Fi, she’d been a long suffering wife long before the ‘house’ incident happened. She’s put up with a lot. This is the last straw for her, she absolutely loves her house.

The story keeps you right on the edge of your seat all the way throughout the book, its so skilfully written that you just can’t put it down until you get to the last page, you just have to see what happens.  It’s all very tense. Talking of the end, I really liked the subtle twist, it really makes you sit up and think. And on that note, its such a scary thought to think that this could happen to any of us …

Can’t wait for the next one !

A huge thank you to Netgalley for the digital copy of the book.